Today’ chunk of smart comes from the classic & awesome productivity book – Getting Things Done.
Though the idea also intersects with concepts from a new favorite of mine – The 4 Agreements.
Both are great.   The first is tremendously actionable – the 2nd might be the best self-improvement book, on a per page basis.

In Getting Things Done the author calls for the practitioners to have:

Improve your life by keeping your mind, mental attitudes, emotions, and reactions to Be Like Water.
Which is a great concept considering many of the things going on in the world.   It can help you deal with the pandemic, clickbait journalism, social media, or even cancel culture.   The concept is to keep your mind and mental energy down the middle of the road, and find more peace and stillness.    If you are into that kinda thing, and all….

Mind Like Water means to keep your emotions and reactions to outside stimulus in direct proportion to what is actually happening.   As the Buddhist concept says:

It never overreacts.   How much does water react when you throw a rock into it?   EXACTLY THE AMOUNT relative to the force put upon it.   Never more.  Never less.

It adapts to whatever environment it is in.   Water will take the shape of it’s container.  It will always flow down.

Now, water can flow or it can crash. Only exactly to the extent necessary.  Not more.  Not less

Be water, my friend.

This can be the exact mental model to use when learning/realizing:  Nobody can ever MAKE YOU FEEL anything.

As you can see, most of the meaning of our interactions come from our own ideas which are under our own control.  Not actually the face-noise said.   Mind like Water is a reminder to keep the end of point 3 in proportion to what is really happening.   Not our interpretations and – more importantly- our emotional reaction to them.

Or, as I have heard said before:  If you walk up to me, say nothing, and punch me in the head – that is your fault.   Anything that happens from this, after you leave the room, is my fault.

That does not mean that water is passive or docile.   Anyone who has seen the grand canyon, or sheer cliffs by the ocean, knows that is not the case.   It is OK to do Like Water and move away from the rock.   Water does not fight the rock through.   It moves to a different more peaceful state.   Only to return for peaceful times.

Mind like water is a particularly good concept to remember when living out the lessons of my newest favorite book:  The 4 Agreements by Don Miguel Ruiz.  <kinda sorta not really spoiler alert>    In his teaching, 2 of the 4 agreements are “Do not make assumptions” and “Don’t Take Anything Personally.”   Mind Like Water is a great way to live those 2 agreements.

If we are living Mind Like Water, we will not take the things others say personally.   We will not over react and fight people.  We don’t fight words.   We take them in and let them go.   We refuse to allow our brains to go “Well he said X, and that means Y.   And people that think Y always also thing A, B, C – and that is BS.  I will not put up with them trying to LMNOP!!   You Nazi!”

If you mind is like water, it will experience more peace and more stillness.   It sounds kind of nice, doesn’t it? 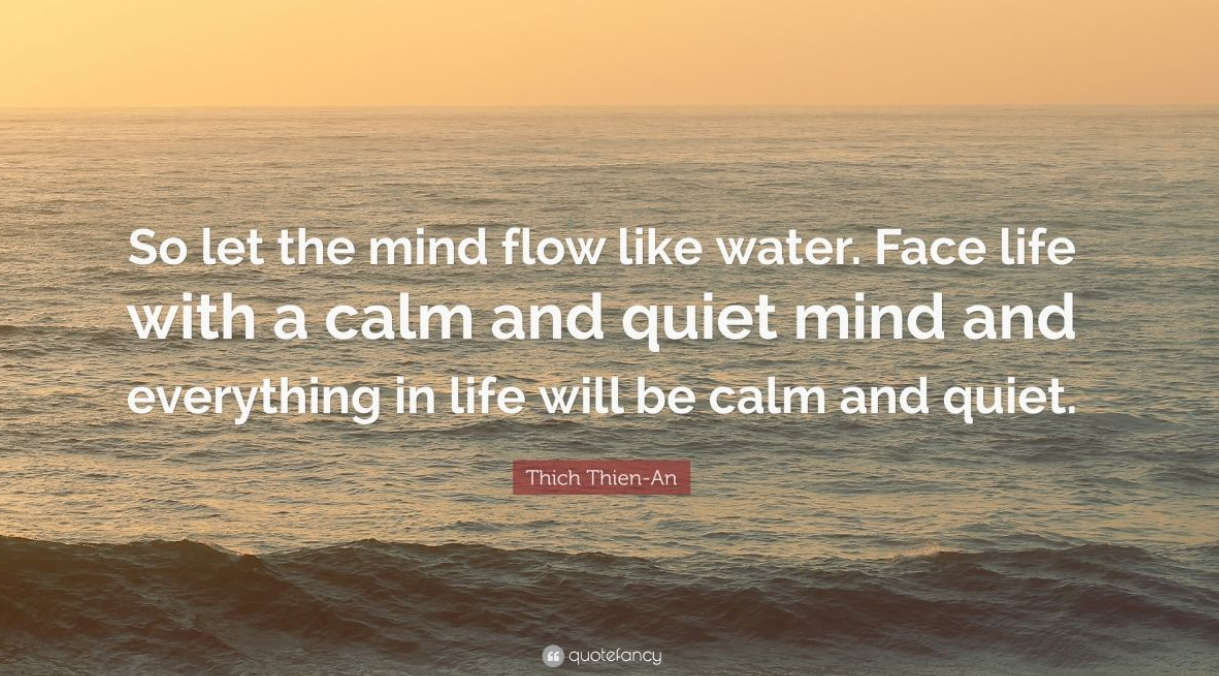