Skip to content
Hey! I’m running the show around here. Don’t you know that? 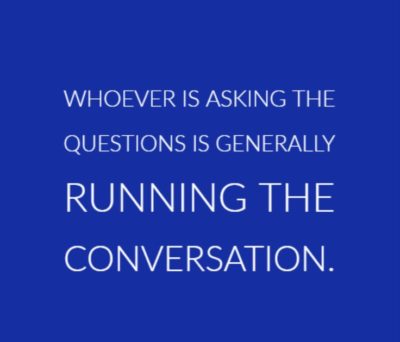 “Whoever is asking the questions is generally running the conversation.”

I think we all know this one.   Though it’s good to have a reminder to not let our client conversations get out of hand.

Mind you, it’s good to have the client asking some questions because it can act as a trial close.  This also lets you discover the thought lines that are important to them.   As long as you don’t cede control of the conversation to them.

You are in charge of the conversation, and where it’s going.  Which is obviously going to a closed sale.

When you feel like the client is starting to take over, there are some great catch all questions you can ask to regain your place.

“What makes you say that?”   ->  This is a great one.  It breaks the momentum.   This is great to use in a situation where the client is saying something that seems obvious to them, but you have (or can see) other possible options.   It makes them stop their momentum to explain themselves.

“And doing that will solve _____ ?”   -> To bring up an unresolved point from the client’s thought process

One of my favorites is “When you say ___ , what do you mean?”   -> Use this to use an language ambiguity to hinge the conversation is a different direction.

Then layer with “That’s why I thought too” or “most of my other clients thought/said” or “if you are like me, and I think you are, we would….”

Now go sell someone something.