Skip to content
Stop Having Selfish Expectations of your Employees 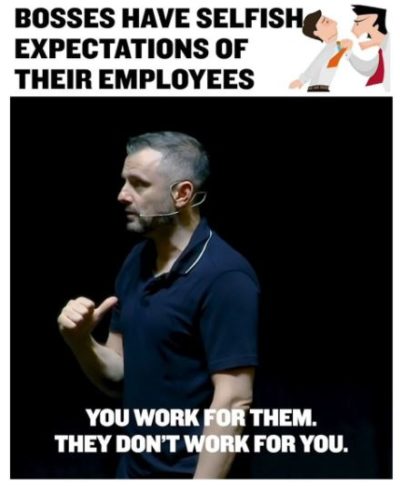 I know that I have been posting quite a bit of Gary Vee lately.

And you should pay attention.  Because it’s not really exactly because I like him…per se.

I’m starting to like him – begrudgingly.   I didn’t want to like him originally because he says quite a bit of uncomfortable stuff that I don’t “like”.  BUT, he’s right.  Damn it, he’s right.

Right about a lot of things.   About advertising on social media is cheap.   1-2-3, let’s say it together in the most whiny tone possible “But, I don’t like social media.”

Tough…your customer do and you like their money.  Plus, it’s way cheaper and more targeted than a billboard or TV ad.  Which you seem to have some unfounded affinity for.   You know why you have the affinity for it?

The other thing that he’s right about is about being a good boss.  Especially when motivating younger employees.   He spits right in the face of “that’s the way it’s always been.”

If you want to keep motivating good employees – the kind that can get a job anywhere – using management styles that are “the ways it’s always been” – or “that’s how my boss did it” – Good luck going forward man.   Good people have options.    2 points – (1) yeah, and that boss also did business with desk phones and fax machines.  Catch up; (2) You didn’t like that boss.

I wrote it before:  If you plan on ever employing people who are currently under 30, you better catch up on who Gary Vee is and what he’s saying.   He’s rich, he’s smart, he’s right a lot of the time (nobody is always right), and HE’S TRAINING YOUR FUTURE EMPLOYEES RIGHT NOW.   You better find out what…..