What’s up with Stoicism?!

One of the more popular topics in the personal improvement world has become Stoicism.   Over the last couple of years, the topic has gained a lot of attention.   And, frankly, a lot of it makes sense.   There are some great quotes from people like Marcus Aurelius that I have enjoyed and shared.

Though – honestly – I didn’t really know much about what it actually is.   I recently saw this blog post form author Marc Manson from The Subtle Art of Not Giving a Fuck fame.   Here I will share the info from his blog post:  https://markmanson.net/why-i-am-not-a-stoic

You often hear about the philosophers of Ancient Greece and Rome, but if you’re like me, it’s hard to sort out all the names and ideas in your head. Here’s a simplified way to think about it:

You’ve likely heard of Socrates. He’s the OG, the godfather of western philosophy. Socrates taught Plato and Plato taught Aristotle. You’ve probably heard that too. Then, Aristotle taught Alexander the Great but Alexander the Great skipped the philosophy and went straight to conquering most of the known world. You do you, Alex.

Anyway, what Aristotle argued was that happiness came from living a life of virtue. He listed about a dozen of these virtues, such as courage, temperance, wisdom, modesty, etc.

This sounded great on the surface. The problem was that people soon realized they had different ideas about how to measure virtue. Is “temperance” three beers or twelve beers? Is it right to be honest even if it will hurt somebody or should one be compassionate even if it means being slightly dishonest?

These perennial arguments caused Greek philosophy to split into four schools of thought. These four schools would then dominate philosophical discourse for more than five centuries… until the Christians showed up and burned everybody’s books.1

The four schools were: 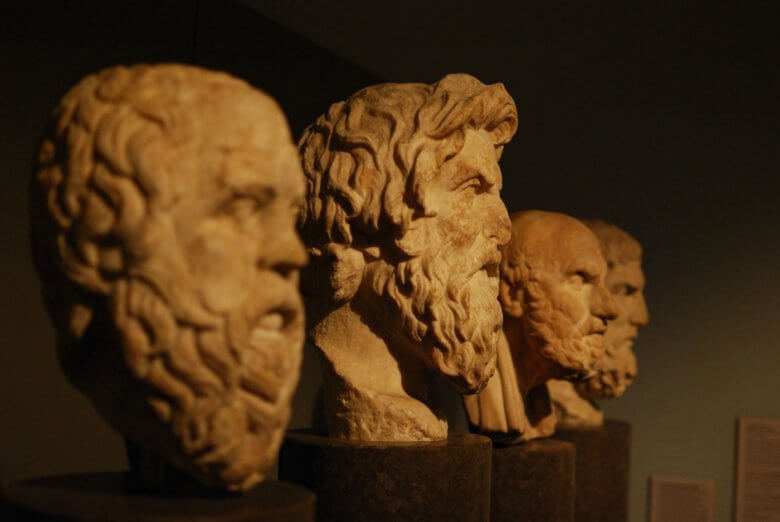 The Cynics distrusted all worldly things. Today, we would consider them as a kind of weird cross between minimalists and nihilists. Cynics gave away their possessions, opted to live in poverty, and turned down any favors offered to them. There are many famous stories about Cynics being homeless, running around naked, pooping and fucking in strange places, and basically being the trolls of the ancient world.

Whereas the Cynics thought everything was pointless, the Skeptics believed that little to nothing could ever be known for sure. What was virtue? What was truth? How do you know that the world was real, that your memories are real, that anything is real?

No, they weren’t smoking pot in a college dorm. These were serious philosophers with some serious points about what is knowable. They may not have been a hit at parties, but they did make important contributions to the philosophy of science—contributions that are still felt in philosophy and science today.

Meanwhile, the Epicureans were hits at parties. Epicureans believed that we’re all going to die, so fuck it, might as well enjoy yourself as much as possible between here and there. Sometimes Epicureans are characterized as “anything goes” libertines, but there was a lot of subtlety and nuance to Epicurus’ ideas — it wasn’t just all about having fun all the time, it was a different approach to virtue. That said, Epicureanism is the “YOLO” philosophy of the ancient world.

Then there’s Stoicism. Stoicism is probably the most complex of the four schools. Stoics believed in rationality as the path to virtue, and therefore, happiness. They saw emotions as potentially dangerous distractions from one’s goals. The Stoics believed that one should minimize one’s passions and make decisions based as much as possible on facts.

Stoicism has made a bit of a comeback the past decade, largely due to a number of popular books by Ryan Holiday and William Irvine, as well as outspoken support from prominent thought leaders like Tim Ferriss. Stoicism has become the philosophy du jour in the world of tech and business advice and it’s not uncommon to see discussions of Stoic ideas pop up at conferences, on podcasts, or even in business books.

I think this resurgence in Stoic philosophy is great. There’s a lot of value in it. But there are also some aspects of it that I’m not so certain about.

Obviously, what follows here is predominantly my opinion, backed up by my understanding of some relevant research. Many of these points can (and should) be debated endlessly. So, before you send me an angry email (not very stoic of you, by the way), just know that I know my summary here is not perfect. But it’s not meant to be.

Tomorrow I will share Marc’s thoughts on the Pros and Cons of Stoicism.