Getting Things Done: Clarifying your Inbox

Clarifying: Getting “In” to Empty

Assuming that you  have collected everything that has your attention, your job now is to actually get to the bottom of “in.” Getting “in” to empty doesn’t mean actually doing all the actions and projects that you’ve captured. It just means identifying each item and deciding what it is, what it means, and what you’re going to do with it.

This is NOT doing the things that need to be done.   This is essentially starting a VERY SPECIFICALLY FORMATTED list of things to do!!

If you pick up something from “in” and realize, “I’ve got to call Andrea about that, but I’ve got to do it on Monday, when she’s in her office,” then you’ll defer that action immediately and enter it on your calendar for Monday.

It’s very important that you understand this plan on organizing your actions, before you actually start processing what you’ve captured in “in.” 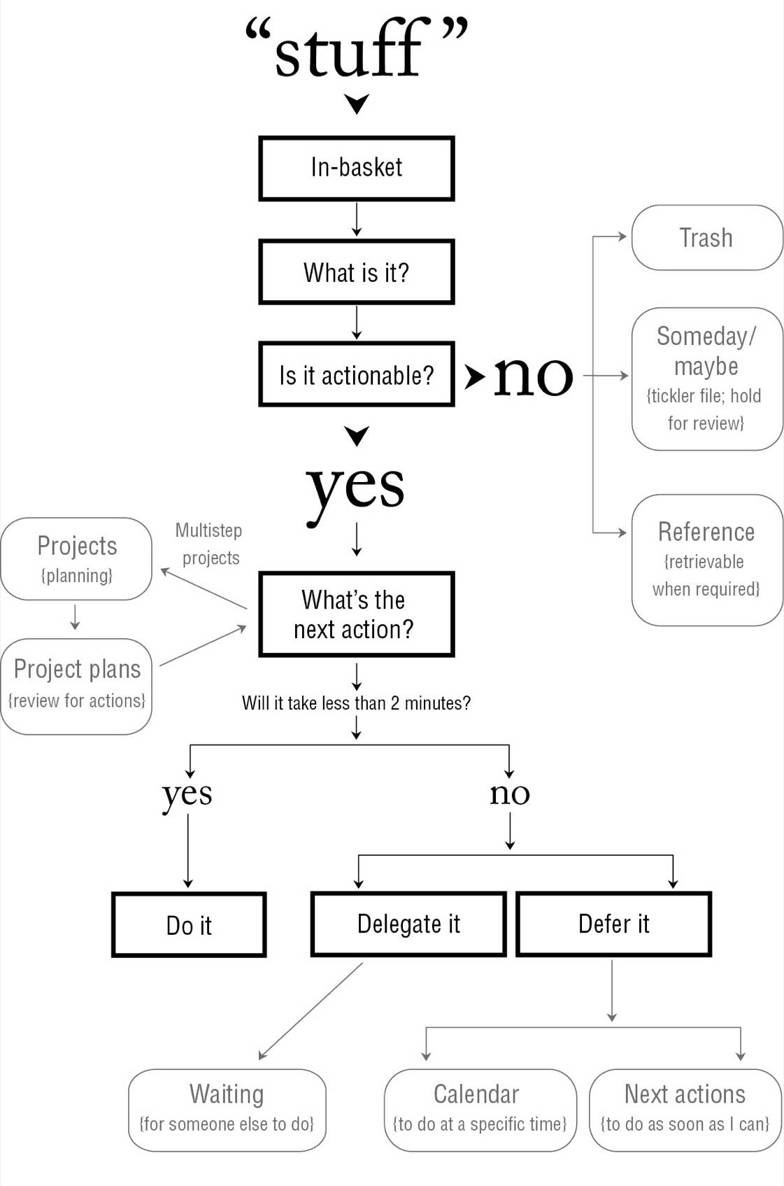 The first thing we would have to do (after we’ve collected the in-tray) is make sure all their hardware and software are working. Then we clean up (print out and erase, usually) everything we have previously tried to organize in their task lists and put it all into “in.”

The best way to learn this model is by doing. But there are a few basic rules to follow:

Top Item First:  Process does not mean “spend time on.”

The verb process does not mean “spend time on.” It just means “decide what the thing is and what action is required, and then dispatch it accordingly.” You’re going to get to the bottom of the tray as soon as you can anyway, and you don’t want to avoid dealing with anything in there.

When you’re in processing mode, you must get into the habit of starting at one end and just cranking through items one at a time, in order. As soon as you break that rule and process only what you feel like processing, in whatever order, you’ll invariably begin to leave things unprocessed.

Nothing Goes Back into “In”   :  If you did that, you’d never have a list, because you would finish everything as soon as you saw it. You’d also be highly ineffective and inefficient, since most things you deal with are not to be acted upon the first time you become aware of them.

The Key Processing Question: “What’s the Next Action?”

What If There Is No Action?  It’s likely that a portion of your in-tray will require no action. There will be three types of things in this category:

It’s likely that at some point you’ll come up against the question of whether or not to keep something for future reference. I have two ways of dealing with that:

Too much information creates the same result as too little: you don’t have what you need, when and in the way you need it.  The purpose of this step is to create a list of what needs to be done – and define it as an action step.   The first action step to be taken.   For example, it’s not “replace roof” it’s “Get quotes to replace roof”.   Or, I guess, “Buy Shingles” if you are doing it yourself.