Getting Things Done: Do it? Delegate it? Defer it?

Once You Decide What the Action Step Is

You have three options once you decide what the next action really is:

Do It – If the next action can be done in two minutes or less, do it when you first pick the item up. If the e-mail requires just a thirty-second reading and then a quick yes/no/other response back to the sender, do it now.

Even if the item is not a high-priority one, do it now if you’re ever going to do it at all.

The rationale for the two-minute rule is that it’s more or less the point where it starts taking longer to store and track an item than to deal with it the first time it’s in your hands—in other words, it’s the efficiency cutoff.

If the thing’s not important enough to be done, throw it away.

Delegate It – If the next action is going to take longer than two minutes, ask yourself, “Am I the best person     to be doing it?” If not, hand it off to the appropriate party, in a systematic format.

Tracking the Handoff : If you do delegate an action to someone else, and if you care at all whether something happens as a result, you’ll need to track it.  In this case “the next action item” is follow up – and when.   Log it.

What If the Ball Is Already in Someone Else’s Court?  On the paper that says “Do my taxes,” write something like “Waiting for tax documents from Acme Trust” and put that into your Pending stack.

Defer It : It’s likely that most of the next actions you determine for things in “in” will be yours to do and will take longer than two minutes to complete. These actions will have to be written down somewhere and then organized in the appropriate categories so you can access them when you need to.

The Pending Things That Are Left

If you follow these instructions, you’ll dump a mess of things, file a bunch, do a lot of two-minute actions, and hand off a number of items to other people.

You’ll also wind up with a stack of items that have actions associated with them that you still need to do—soon, someday, or on a specific date—and reminders of things you’re waiting on from other people.

This Pending group is made up of the actions you’ve delegated or deferred. It is what still needs to be organized in some fashion in your personal system, and we will cover that later.

Identifying the Projects You Have

This last step in getting to the bottom of “in” requires a shift in perspective from the single-action details to the larger picture—your projects.  Again, I define a project as any outcome you’re committed to achieving that will take more than one action step to complete.

Organizing: Setting Up the Right Buckets

Airtight organization is required for your focus to remain on the broader horizon and eliminate the constant pressure to remember or be reminded.  This gives you tremendous power because it allows your mind to let-go of lower-level thinking and graduate to intuitive focusing, undistracted by matters that haven’t been dealt with appropriately.

But your physical organization system must be better than your mental one in order for that to happen.

As simple as that sounds, it begs a very big question: What does something mean to you? It turns out that much of what people are trying to organize has not been clarified, as per the previous chapter. And even once it has, there are more refined distinctions that are possible, which will add greater creativity and control for you.

As you initially process “in,” you’ll create lists and groupings of things you want to organize and you’ll invariably think of additional items to include. In other words, your organization system is not something that you’ll necessarily create all at once, in a vacuum. It will evolve as you process your stuff and test out whether you have put everything in the best place for you.

There are seven primary types of things that you’ll want to keep track of and manage from an organizational and operational perspective:

The Importance of Hard Edges

It’s critical that all of these categories be kept pristinely distinct from one another. 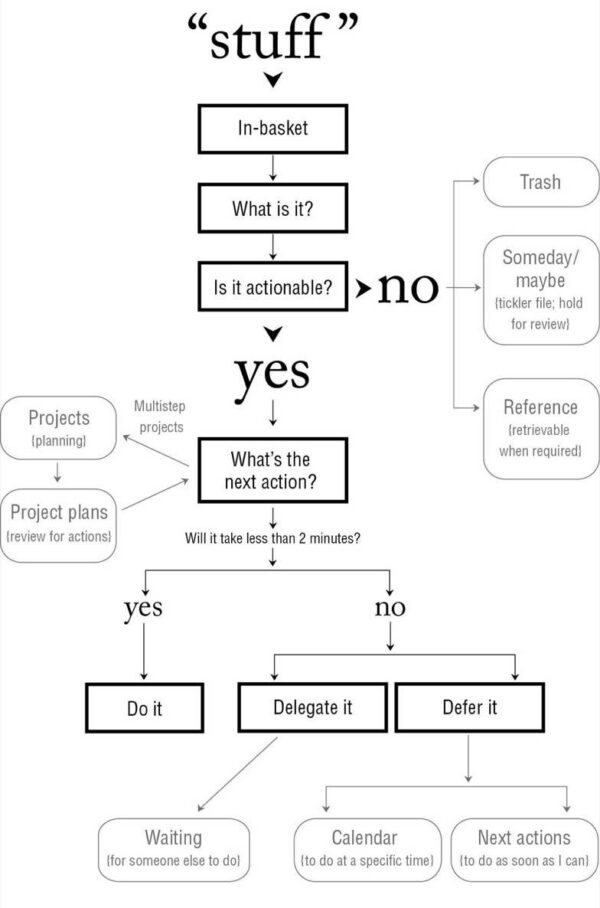 If you neglect this categorization, and allow things of different meanings into the same visual or mental grouping, you will tend to go psychologically numb to the contents.

If you have projects that you’re not going to be doing anything about for some time, they must go on your Someday/Maybe list so you can relate to the Projects list with the rigorous action-generating focus it needs. And if something you’re “Waiting For” is included on one of your action lists, nonproductive rethinking will continually bog you down.

All You Really Need Are Lists and Folders

Once you know what you need to keep track of (covered in the previous chapter, “Clarifying”), all you really need are lists and folders—totally sufficient tools for reminders, reference, and support materials.

Your lists will keep track of projects and someday/maybes, as well as the actions you’ll need to take on your active open loops.

Folders (digital or paper based) will be required to hold your reference material and the support information for active projects.

When I refer to a “list,” keep in mind that I mean nothing more than a grouping of items with some similar characteristic. A list could look like one of at least three things:

(1) a file folder or container with separate paper notes for the items within the category;

(2) an actual list on a titled piece of paper (often within a loose-leaf organizer or planner); or

(3) an inventory of items on a list in a software program or in a digital mobile device.