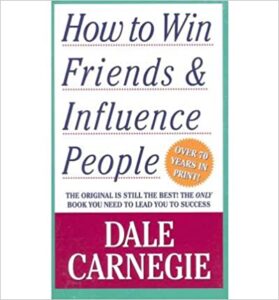 Principal One:  Begin with praise and honest appreciation.

Stop using the word “but” when you start with praise before criticism.  Once you hear that, you may question the sincerity of the original praise.  Praise just sounds like a contrived lead-in to a critical inference to failure.

Carnegie to secretary: “Josephine, you have made a mistake here.  But it’s not that big of a deal.  Lord knows I have made many a mistake as well.  You are far better than I was at your age.  I did many stupid careless things.  Don’t you think it would have been wise to ….”

Principal Three:  Talk about own failures before criticism.

Letting someone save face.  How vitally important it is and how few of us think of it.  We ride rough shot over the feelings of others.  Finding fault.  Issuing threats.

French aviation pioneer:  “I have no right to say or do anything that diminishes a man in his own eyes.  What matters is not what I think of him but what he thinks of himself.  Hurting a man and his dignity is a crime.”